I have now graduated and am living in Japan teaching English

Well doesn’t time fly? It doesn’t seem so long ago that I was making a similar post about how it’s been three years, or four. Now it’s five. It’s a strange one this year. I’m not in the country so I can’t visit the grave. My usual strategy of meeting a family member or friends is out. While I was at uni I always lit a candle in Norwich Cathedral…but I can’t do that either. To be honest I don’t really know what to do.

Yesterday, the actual date of the anniversary, was just a normal work day. I felt fine until someone commented on how tired I looked that afternoon. I don’t know why, but it was like someone acknowledging my rough day seemed to open up all the emotional floodgates. I suddenly felt like one of the living dead and could barely hold a conversation. I didn’t know what to do in the evening. Maybe if the weather was warmer I would have sat by the lake, or visited the church in Matsue… I ended up going to bed as soon as I got home. About five hours later I realised I should eat something, so I did. Then went back to bed. It took everything in me to get up and face work today. I’m amazed that even though it’s been so long since mum died, grief still has the ability to immobilize me. Eating, getting dressed, walking…they take an effort that I just can’t seem to find right now.

I think your family history is something you don’t think about too much until you’re older. There is so much I want to ask mum about me as a child, about her life, her childhood, her as a person, my grandparents. It’s like there’s this big empty part of me because of all these things I’ll never know. My future feels empty too because all of the things that could have happened if she were still alive never will.

Why is it that when you cry, your nose just does not stop running?

The thing that bothers me still is not even that she died. People die, life goes on. (Though it’s easier when they don’t all die at once!) It’s just that I can’t stop thinking about why she ended her life. Why did she pick that day rather than any other? Was it something I said or did? Was she tired of being so ill? Was she scared she would never get better? Was she too crazy to know what she was doing? If I ever had children, I can’t imagine ever thinking that dying would be better than raising them, than seeing them grow up. The rejection hurts. It really, really hurts. (And I know that what it comes down to is that she was depressed, and that’s why she ended her life. And I know it wasn’t me…but these questions and thoughts don’t stop this time of year.)

But that’s life right? The thing is that we don’t know. Something could happen tomorrow or it could happen forty years down the line. It’s a cheesy phrase that we all know, but you really have to make the most of every moment. Forget the things that don’t matter. Appreciate every little thing you have. Say what is important to your nearest and dearest. If you love someone, say so. You have to work out what you want to do before you die and start getting those things done! Life is too short. We don’t know what happens after all of this.

I learned that the horrific things you go through make you a stronger and better person. I learned that we can get through whatever difficulties we have in our lives. We can do what ever we want to with the time we’ve been blessed with. We have the potential and the ability. We just have to look inside ourselves and see it and realise it. The best thing, is that once we know it’s there, we can all make our own light and shine. 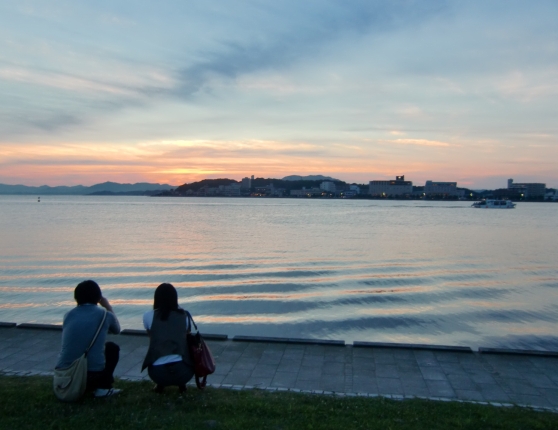 The beautiful lake in Matsue city, where I lived in Japan.

One thought on “Lizzie’s Anniversaries”

Follow Surviving Their Suicide on WordPress.com
Next episode:April 30, 2020
The seventh episode is here!